How can I (legally) stop someone from texting and driving?

On my way home from Starbucks this morning, I was cut off and nearly killed by a young girl in a Prius. She was texting as she merged onto the four-lane highway. She continued to text throughout the event that nearly killed us both. I honestly don’t think she noticed what had happened. I was going about 35 MPH when her Prius nearly took off the nose of my Jeep. I slammed on the brakes, checked my side m 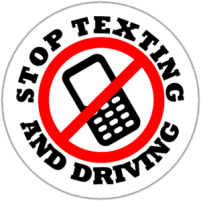 irror, and swerved into the fast lane. There was about two car lengths open in front of a truck. He had to brake to avoid me, but I was able to quickly dodge back into the slow lane. After that amount of adrenaline so early in the morning, I almost didn’t need coffee anymore. Almost.

I was following the girl in the Prius, watching her continue to text. Her eyes were mostly on the phone. I could see them through her rear-view mirror. Only occasionally did she glance up at the road. As we approached the next intersection, the light turned yellow. The girl in the Prius had no idea, so I blew my horn to get her attention. She looked up at the light as it turned red, slammed on her brakes, looked back at me, and then flipped me the middle finger. Of course she quickly directed her attention back to the phone.

I don’t believe I have ever felt such road rage. I wanted to tromp on the gas and ram my Jeep into her cute little Prius. I wanted to get out of the Jeep, walk up to her Prius, smash the window, and slap her silly. I wanted to take a baseball bat and demolish that little red Prius. Of course, if I did any of those things, I would have probably wound up in jail. So I just took two deep breaths, changed lanes and sped past her.

Here is my moral dilemma: That menace of a girl will probably end up causing an accident. Maybe not today. Maybe not tomorrow. But some day. The odds are not in her favor. She probably won’t kill herself either; she will probably take out a family of four. Would a few days in jail and some fines be worth it to prevent a future tragedy that may cost lives?

There are a lot of depressing facts about texting and driving here: http://stoptextsstopwrecks.org. Unfortunately, their tips are focused on the texters (is that a word?).

Random musings from this week: