I have a confession: I have never read any of the Twilight books and I have only seen about 1.39 of the movies. That said, I can’t imagine any of those stories are as entertaining and well written as New Hope by Steve Hobbs. Hobbs invites us to a small town in Maine and introduces us to a group of teens in way over their collective heads. The story is full of action and adventure, and includes a unique twist on traditional vampire mythologies. As a fan of The Lost Boys, Stephen King, and all things eighties, I was hooked from the first page. I was even able to overlook the snub on Sammy Hagar (who I very much prefer over Roth).

I was immediately drawn to Miri, a fearless young girl with a 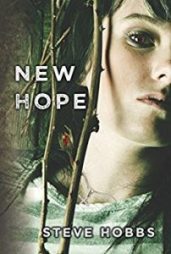 dangerous sense of curiosity. As an ardent fan of The X-Files, I couldn’t help imagining that this is what Dana Scully must have been like as a teenager. Miri provided Hobbs an intriguing main character and he developed her well; she is equally confident and vulnerable. Hobbs adeptly captures the burgeoning investigative skills of the tenacious girl and provides just enough poignant moments to remind everyone she is still daddy’s little girl.

Although Miri is the star, the rest of the cast, including the adults, were equally compelling. Chris provided boyish charm with a dash of humor and sarcasm. Chris also provided some reflections on writing that I particularly enjoyed: “Chris wondered if one of his books would one day be lost in the rubble of some seedy little shop like this. That would be enough he thought, if he wrote just one book that hardly anybody read and it finally got lost in a barn full of similar books written by other people that nobody ever heard of.”

Here are just a few of my favorite moments/lines:

If you are looking for an inspirational coming-of-age story with a strong female lead (and a little supernatural adventure), look no further. New Hope is highly recommended. With so many rich characters and story possibilities, I can only assume that Hobbs is penning a sequel. Check out Steve on Twitter or Facebook, and visit his website at www.hobbspond.com.

Drunken sailors and other random musings for a rainy Sunday

Random Musings for a Sunday Evening