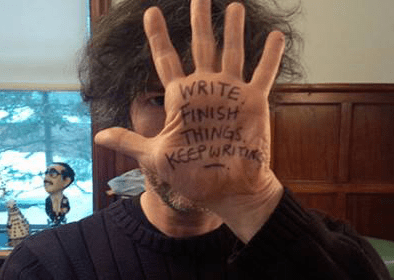 I served on a submarine for several years. There isn’t much room for books on a submarine—the library was a drawer with maybe 20 tattered trade paperbacks—and, this was the pre-Kindle world. So, when we were at sea we told each other sea stories to pass the time. Some of the stories were personal (hellishly exaggerated childhood stories) and some were retellings of 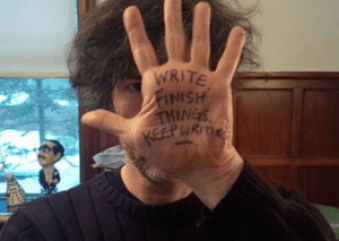 stories we had read. A friend once told me the story of Sandman over the course of many days at sea. Each day he picked up exactly where he had left off the day before. He described the images and captions and wove the story for me. Death was my favorite character before I even saw her depiction in the comic, but he explained every detail of her with stunning accuracy. When I eventually collected the comics for myself, I was thrilled that I was already a fan of the author; I had read (and loved) Neil’s Don’t Panic a few years before.

Neil challenged my imagination during those many days at sea. He inspired me to pick up a pencil and write. I had scribbled stories and poems in grade school, but never with much purpose or conviction. Neil made me realize I wanted to be a writer and tell stories like he did. I wanted to write stories that other people would want to retell.

Now, Neil is everywhere. He has a show on television (American Gods), a show on the radio (Anansi Boys), he has a film or two in production. He has countless books. And comics. His advice on writing and craft is sage. His generosity is endless. His contributions to the arts seem to have no bounds.

To this day, every time I see him or hear him, I am reminded to just keep writing, to just keep creating. Write. Finish things. Keep writing. I keep the message as my wallpaper, my daily inspiration.

I encourage everyone to read his books, give his books as gifts (there are ones for children, and adults, and adults that want to be children), and follow his twitter feed. Listen to him read The Raven or A Christmas Carol. Support PEN American and UNHCR, and any other cause Neil supports. Let him inspire you to do more, to be better this year.

I love you all. Even the ones I don’t know. This year I’ve not got a new New Year’s wish. I hope the world is gentler to each of us in 2018, though. And that we do not forget how to be kind.

We love you too, Neil. Keep doing what you do.

Book Review: The Company of Demons by Michael J. Jordan