Book Review: The Company of Demons by Michael J. Jordan

A grisly murder opened old wounds for attorney John Coleman, the narrator and main character of Michael Jordan’s debut novel, The Company of Demons. The demons surrounding him were both literal and figurative. John’s subconscious motivation to find the psychopath and vindicate his father was compelling. I cared about John even though I didn’t always like him. I had genuine empathy for his circumstances, but I also wanted to slap him around at times for being such a stupid bastard. The complexity of that 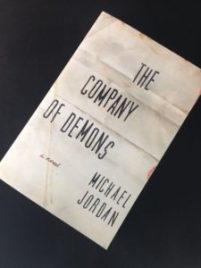 emotional connection made him very real to me. Sometimes the narrator was almost too honest, too revealing. All his sins and flaws were fully exposed for the reader, but to no one else. This was a narrator I trusted, but a character that probably shouldn’t be trusted.

The pacing in the early chapters was a little slow, but the story was enticing enough to keep me reading. It really starts to pick up about 100 pages in, and then it doesn’t let off. Jordan’s control of time was skillful and disciplined. The story unfolds linearly, almost in real-time, with very few gaps, and even fewer lengthy flashbacks. The time compression before and during the trial was a little jarring at first, but ultimately necessary.

I initially had some concerns about the limitations of a first-person narrator, but Jordan was adept at putting the narrator in the right place at the right time without being heavy-handed. Jordan also created a strong supporting cast to provide alternate perspectives through dialogue, without relying solely on exposition. The portrayal of the wife and sister-in-law was a little one-dimensional and tiring at times, but given the circumstances of the interactions, perhaps that was deliberate and justified realism.

Jordan’s story is packed with suspense and plot twists. You know it’s a good story when you start reading slower toward the end, knowing there are only a few pages to go, and still wanting the story to continue. It’s always bittersweet to say farewell to characters you have started to really know and understand.

The Company of Demons is really two books in one: A serial killer thriller and a Grisham-esque courtroom drama. If you like either of those, you can’t go wrong with Jordan’s debut. I’ve been shying away from my Kindle; I realized I missed holding an actual book in my hand. The print version of the novel did not disappoint. The simplicity of the cover is what originally caught my attention on Twitter; it is even better in person. The overall design and printing are quite nice as well.

Random Musings from my trip to Scotland