I was not certain what to expect from either a “religious mystery” or a “religious thriller.” I was intrigued and lulled as the story unfolded, slowly drawing me into the complex intersection of memory and perception. It was story about lost innocence, partially repressed memories, memories that should have been repressed, and, ultimately, how those memories distort over time, sometimes becoming clearer, sometimes murkier. A line that resonated with me for quite a while: “History wants to teach me something, serendipitously begging me to learn.” Jael had much to learn, and yes, of course there was a mystery to solve and some thrills along the way. 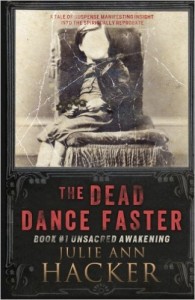 Julie Ann Hacker penned a subtle and effective plot to propel the story. She made deft use of a journal to provide detail and depth both to the story and to her main character, Jael. I have seen similar devices overused or misused in the past, but not so here. Hacker also delivered some haunting imagery that made me stop dead, re-read, highlight, and read again. A bible as a step stool, a pleasantly repeated image of brown paper bags, and some downright creepy family photos, just to name a few.

A few of my favorite lines:

Truth of ‘Shakespeare’s skull’ to remain a mystery