Over the last year or so, I have acquired three standard Pilot fountain pens. I inked all three with take-sumi iroshizuku ink. Here are my reviews with a quick summary of features at the end. 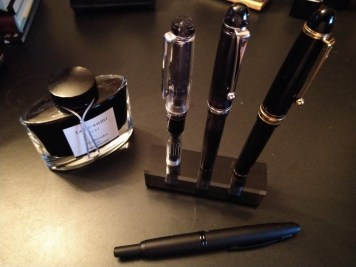 Heritage 92
This was my first Pilot fountain pen. I went with the medium nib. The Heritage is only available as a demonstrator; it is clear but has black/grey accents. The pen cap and clip are more contemporary in style. The ends are squared vice rounded. I loved this pen from the moment I inked it for the first time. It is balanced and lightweight. The 14k nib inks a smooth line. The piston filling system is similar to traditional convertors and is very easy to use. The capacity is excellent.

Custom 74
I chose the black smoke model, but it is also available in blue, clear, orange, and violet. I also went with the fine nib. I wasn’t sure how I would like that, but as it turns out, I like it quite a bit. The Custom 74 has the look and feel of a classic fountain pen; from a distance, it looks like an antique, but it certainly is not. I love the silver accents (that was one reason I originally shied away from the 823). The filling system is a CON-70 which is a pump style that is quite unique and easy to use.

Custom 823
After I filled a few pages with the Custom 74, I realized my collection would not be complete without an 823. This is THE pen; it’s the workhorse that Neil Gaiman swears by. You would think his endorsement alone would be enough for me to break out the credit card, but it wasn’t. I resisted for a while, mainly because of the color selection. I prefer blacks and greys and clears. I know that seems petty and silly, but I really worried that I would not be able to write with an amber-colored pen. However, all that changed when pilot released a smoke version. The only draw-back I saw was the gold highlights. I would have preferred silver with the black theme, but oh well, I guess gold will have to do. I had a little trouble inking it for the first time; I’m still not sure why. I even broke out the instructions even though this isn’t my first vacuum filled pen. The instructions said to only use 70 ml pilot ink. I can’t imagine why that would matter. I also refuse to use blue ink, so the bottle that came with the pen was no help. After a few cycles, it finally took a little ink. On the next cycle, it filled the reservoir with ease. I suppose it just needed primed. Although it is technically a demonstrator, the body is dark, and the ink level is very difficult to discern even with a flashlight. That doesn’t really bother me, but I thought I would mention it for full disclosure. I really liked the weight of the pen, even while I was fumbling to fill it with ink. And from the moment that gold nib touched the page, I was in love. This is officially my go-to pen from now on. I am taking the Custom 74 to work; hopefully I won’t have to buy a second 823 just for the office.

Vanishing Point
Since I am writing a blog about Pilot fountain pens, I guess I would be remiss if I didn’t mention the Vanishing point. I purchased the matte black version several months ago. I wish I had purchased the 823 that much earlier. I like the concept of the vanishing point, and it is definitely a great design, but it feels awkward in my hand with the clip in the way. Everything feels upside down and I just don’t like it. I also decided to try a stub nib and I wasn’t very pleased with that either. I suppose it would be a great pen to travel with, and I thought it would be a great everyday pen at work, but I found that I was reaching for the pilot varsity disposables instead.

As always, I buy all my pens and supplies from The Goulet Pen Company. They ship fast, and they have an excellent selection. I also highly recommend their instructional videos. I have only been using fountain pens for about two years and I learned most of what I know from Brian Goulet’s YouTube videos.

Random Musings about Hunter Killer (and other submarine films)