Random Musings about Hunter Killer (and other submarine films)

October 27, 2018 / Mike D / Comments Off on Random Musings about Hunter Killer (and other submarine films)

I must admit up front that I have cherished every submarine movie I have ever seen. There is always some quality or aspect that allows me to overlook the technical inaccuracies or the completely implausible scenarios. Bottom line, Hunter Killer has far more qualities than inaccuracies than most submarine films I have seen. This is no doubt because the film is based on the novel co-authored by George Wallace, a retired submarine officer. 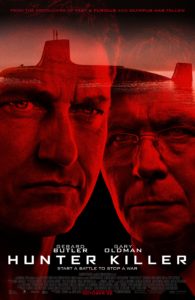 The film stars Gerard Butler as Captain Joe Glass. I’ve known quite a few submarine commanding officers, and Gerard plays the part well. The cast also includes Gary Oldman and a few other actors you may recognize. I was happy to see Toby Stephens (Captain Flint from Black Sails) in a new, yet oddly similar role as a Navy SEAL team leader. I miss Black Sails and wish it would return. If anyone from Black Sails is reading this, please make more seasons of Black Sails. But I digress.

The plot of Hunter Killer was unique and intricate. The film contained all the things you’d expect in a submarine drama: undersea warfare, depth charges, coy tactics, harrowing near death scenarios. The lack of communication between land and a submerged submarine means that a submarine commander is often forced to make critical decisions with little or no information; this builds suspense that borders on terror. Good stuff.

My only gripe with the plot was that the stuff between the Pentagon and the White House—the political aspects of military decisions—was a tad heavy-handed and probably a little over-acted at times (even though I love Gary Oldman). The backchannel operations with the NSA operative seemed implausible, but the sub-plot was entertaining nonetheless.

In my opinion, only three things were missing.

Despite those few missed opportunities, I really hope this film does well and ensures that Hollywood will invest in future submarine films. They average about one every 4 or five years. Since the time of my service, I’ve had the pleasure to have Hunt for Red October, Crimson Tide, U-571, The Abyss, K-19 Widow-maker, and Down Periscope. Even the latter had its moments of entertainment (I warned you, all submarine films are great in some regard).

I won’t have to wait too long for the next major theatrical release, although this one might haunt me a little more than I need. I followed the Kursk tragedy as it unfolded, and I’ve since read some non-fiction books about the events, including the failed rescue attempts. It will be gut-wrenching to put faces to these men. I will probably have nightmares for a few nights, but that is ok. It is a submarine movie and I will love it. Michael Nyqvist is also on the cast of both Hunter Killer and Kursk, so that is kinda cool for him.

Bottom line: Hunter Killer is an excellent and credible submarine drama. I will watch it again when I eventually add it to my DVD collection, but for now, it’s easily in competition for my favorite submarine drama.