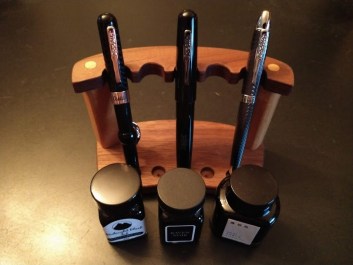 I went with the medium nib and inked it with Kyo No Oto Nurebairo. I liked the feel of the pen, and the bock #6 nib did not disappoint. I had some problems with this pen being slow to restart. And then it seemed to dry completely. I bled off some air and advanced the convertor to get some ink in the nib. It wrote fine, but it was dry again the next day. I thought it was the ink, but I had the same ink in the Conklin Herringbone and that started right up after sitting for a couple days. I was sad, because I was otherwise liking the pen. I decided to clean it out with distilled water and run some Goulet pen flush through it. I re-inked with Monteverde Raven Noir. I’ve been wanting to try this ink and it seems fitting for the pen. I liked the ink. I also liked that it seemed to be flowing nicely. Perhaps that’s all that was needed to get it running well. I put it away for a couple days and it restarted immediately. I used this pen as my primary for several days and I grew fonder of it with each line I wrote. I’ve been working on a rating system for my pens and this one ranks up there with some gold nib pens that cost four or five times more. I highly recommend giving the All American a try. The features betray the price. For under $100, you can’t go wrong.

I am not sure why I needed this pen. I had resisted the urge to purchase it several times before, but I somehow convinced myself it was a necessary addition to my collection. I think alcohol was involved. I went with a medium nib and I inked it with Monteverde midnight black ink. I didn’t really care for the way it inked. Seemed simple enough, but I don’t have a clue how much ink actually made it into the pen. I like the overall look and feel for the pen, but the crescent is bothersome. It doesn’t inhibit writing in anyway, but it’s a visual distraction. The weight is just ok.

I was not impressed with this pen at first, but it grew on me. I used it as my primary for a couple days. It starts quick and is comfortable enough for long writing sessions. In many regards, it has the feel of the Auroras (but much less expensive). I think I still prefer Conklin’s All American, but overall, I’m glad I added this one to my collection.

I went with the medium nib and inked it with Kyo No Oto Nurebairo. The Herringbone is noticeably heavier than the All American, but with a thinner barrel. The pen has a vintage feel and it is comfortable to write with. After writing a bit, I noticed some ink on my fingertip. At first I was worried I had a leak, but I realized that with the narrow barrel there is not much margin to the nib and I must have accidentally inked my finger. I guess that’s a draw-back, but not a major one (at least for now). I’ll have to give it some run-time to determine if it’s tolerable or not. Update: I do not like this pen at all. It might be that I have a tight grip, but my hand seems to slide toward the nib after a few minutes of writing. I get ink everywhere and it is a pain the ass. If you are on the market for a reasonably priced pen, buy anything but this one.