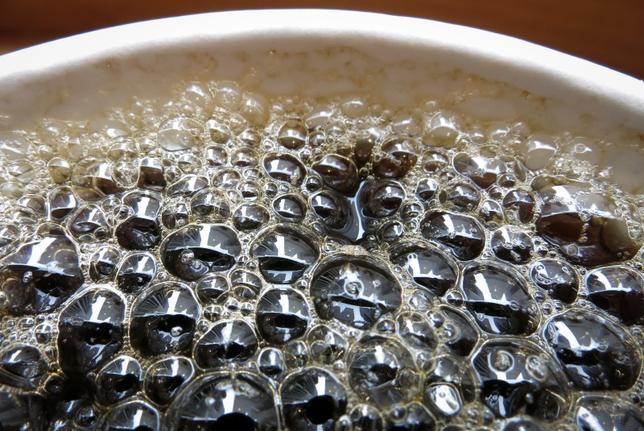 In a 10-year U.S. study, people who drank coffee regularly were less likely to die of many causes, including heart disease and diabetes, than those who didn’t drink coffee at all.

I have a deep admiration for anyone who conducts a 10-year study on coffee. I am also quite pleased with the results. Of all the things I enjoy, I’m glad that at least one of them might be good for me.

—J. D. Salinger, The Catcher in the Rye

A University of New Hampshire chemist says he’s developed a coffee that provides the same benefits to the heart as red wine.

I’m really torn about this. My initial reaction was “Hell no, leave coffee alone.” But after further consideration, I began to think this could be genius. Perhaps they could start to infuse vitamins and minerals too. Then I could drink coffee as my sole sustenance.

I love coffee. It is the highlight of my day. I like to ensure my every day has many highlights. In the morning I start with the Green Mountain Coffee Roasters breakfast blend, usually more than one. Sometime after lunch I have something from Death Wish Coffee – today it was Valhalla Java. After dinner there is a big decision. Do I go to Starbucks for a quad flat white latte or do I brew my own at home? I grind my own, usually single origin from La Colombe. Some nights I opt for espresso, but other nights I prefer using my Chemex pour-over. I once attempted to grow my own coffee; the venture was ill-fated. Someday I hope to at least roast my own. I’ve read a lot about the health benefits of coffee, but to be honest, if they reported it was pure, concentrated evil, I would drink it anyway. Maybe even more.

Hundreds of coffee cans mysteriously wash up on Florida beach

d officials believe they may be from containers that fell off a barge last weekend.

This is like a dream come true. Unless it was bad coffee. This also reminds me I should migrate an old post about coffee.

This is as true a version of the events as I can possibly tell.

I hit a deer with my Jeep on Monday. She had darted out of the brush and bounded directly in front of me. I slammed on the brakes, but not in time. I saw her disappear beneath the hood and I felt the thunk of the impact. When I came to a stop, I fumbled for my phone to dial 911. I looked out my si

de view mirror and she was laying in the center of road. I suspected she was dead, but when I looked back, she was moving, attempting to stand. I put the four-way flashers on and got out of the Jeep. I didn’t know what I was going to do. I slowly walked toward her. She was panting hard and visibly scared. I told her I was sorry. I told her I tried to stop.

She looked around and attempted to stand. I was certain that one or more of her legs was broken, so it was painful just watching her stumble around. She grunted and swayed and panted. Her breath was visible. There was a scent of game in the air, damp fur, maybe blood—although I didn’t see any blood. Traffic was stopped in both directions; everyone watching me watching the deer. I prayed that someone would come help.

A guy approached and said, “We need to get her off the road.” I wanted to say, “Thank you for the obvious,” but I bit my tongue and took solace that I had assistance. He started to shoo her and even used his foot to push her along. She did not like him. I did not like him. He seemed more concerned about the traffic than of the injured deer that was likely suffering with tremendous pain. The genius walked away in search of rope. He actually said, “We need some rope,” and walked away. I suppose he intended to lasso her and pull her off the road. That would have comical I suppose. I envisioned her dragging him down the road. I felt better for a moment.

No sooner had the genius left than another car door opened and a lady, maybe 35 years old, climbed out with a crossbow. Yes, a crossbow. She was dressed head to toe in camo. What are the odds that I would hit a deer and that Rambo’s sister would be in the traffic jam? She tells me she had been hunting all day. She had another tag, but she really just wanted to put the deer out of its misery. I liked Rambo’s sister, but I was not looking forward to watching her kill this deer.

Then a tow truck driver pulled along the side of the all the traffic and turned on its yellow lights. I have no idea what the hell he was doing. All he accomplished was spooking the deer. She darted off the road into the brush. We could hear her thrashing around, trying to get away. The guy in the wrecker left without a word—I guess his goal was achieved. Rambo’s sister said she would call her brother. He lived just down the road and would bring a search light. Rambo’s sister had time to tell me how she was hunting this year to feed her kids. She hated killing, but she needed to feed her family. I really liked Rambo’s sister. Aside from the camo and the crossbow, she looked like a kindergarten teacher. Honest and kind. She was very concerned about the wounded deer. I shared her empathy.

About three minutes later, Rambo showed up and climbed out of his truck with a machete. Yes, a machete. He asked a lot of questions about which direction the deer went. He said, “I’m going to get this deer.” He disappeared into the brush with his machete. His sister stood guard with the crossbow. Occasionally Rambo would yell out, “I see some tracks here. I see a spot of blood. I see another track.” As much as I didn’t want to see his sister shoot this deer with a crossbow, I really didn’t want to see Rambo slice its throat with a machete. I wanted the police to come. And finally they did; well, at least one did. He assessed the situation and told Rambo and his sister they could have the deer. He didn’t care about tags or anything. “It would save me shooting it and calling state to come get it.” Rambo disappeared into the brush again. His sister stood poised with the crossbow. I scanned with the flashlight on my phone. It was not very bright. I kept thinking “Please run away deer. Please be OK. Please go back and find your family.”

Twenty minutes passed before Rambo gave up. He stated that he had tracked her to a fence line about 20 yards in. He suspected she ran along the fence until she found an opening. “She could be long gone by now,” he said, “Damn, I really wanted that deer.” I could tell he really just wanted to kill a deer with a machete. He seemed disappointed. I imagined his sister would still get the deer to feed her family, but nonetheless, I was pleased Rambo didn’t get to cut any throats, at least in front of me.

The cop left. Rambo left. Rambo’s sister shook my hand and I thanked her for helping. “I hope that deer’s alright,” she said. “I hate to think she is suffering.”

I watch too much television. I had to get a new DVR a couple weeks ago and it saved me about 100 hours of my life because of all the taped shows that were lost. I wish I could stop. The accessibility is great nowadays and it’s hard to resist, especially when there are so many great series. The production value and the writing is superb, at least for some. The cable networks have really upped their game.

Years ago, there were just a few series that I cared about. I watched the Sopranos off and on, I watched Six Feet Under. Then of course I had to watch Dexter, which was great up until that dreadful series finale. I even watched True Blood long after I should have stopped. I watched Californication, which was about a writer, so that was easily justified. I watched Newsroom and Breaking Bad and decided that I never needed to watch another series, having seen the very best a series could be. But then the watercooler discussions got me hooked on Game of Thrones and The Walking Dead. For that, I hate watercoolers. I also got hooked on Orange is the New Black, True Detective, and House of Cards almost by accident.

Of everything I watch right now, I would have to say that Homeland is the only one I should be sparing the time to watch; it is truly a heart-pounding, thought provoking, thrill ride. That and maybe Black Sails; I can’t resist pirates. Or Da Vinci’s Demons. I haven’t started Fargo, but I hear that it is great too. Oh, and the final season of Banshee will start in the spring, my violent, graphic, guilty pleasure. Basically, after 825 hours, I need an intervention. Or a cable outage. Or maybe I should just toss out the TV altogether. Although, perhaps those stories will inspire me to write even better stories of my own. Perhaps an hour or two of escapism is healthy. I’ve noticed that when the TV is off I don’t necessarily write or read. I usually end up trolling on twitter or buying things I don’t need on Amazon. Maybe this is the new normal. Maybe this is the new edification. I know that is probably an invalid justification, but I just can’t stop. Perhaps I will someday soon. But I will definitely need to wait for at least 45 more days to see if the new X-files is all that I hope it will be. And even if it isn’t, I know I will probably keep watching anyway. The truth is out there, after all.

public drunkenness and nudity at a conference with defense contractors earlier this year, according to published reports.

I sure hope he had a good time, because the hangover and his ruined career had to hurt.

“Lolita, light of my life, fire of my loins. My sin, my soul. Lo-lee-ta: the tip of the tongue taking a trip of three steps down the palate to tap, at three, on the teeth. Lo. Lee. Ta.”

“Shadow had done three years in prison. He was big enough, and looked don’t-fuck-with-me enough that his biggest problem was killing time. So he kept himself in shape, and taught himself coin tricks, and thought a lot about how much he loved his wife.”