So, this happened. I stayed up to write for a while after my wife went to bed. A little after midnight I decided it was time for me to turn in as well. I shutdown the computer and turned off the hall lights. When I walked into the bedroom, I thought I saw something moving near the ceiling. I waited a few seconds for my eyes to adjust, and confirmed a distinct swooping motion. Then I heard the flap of wings. I thought the motion reminded me of a bat, so I immediately began hoping I was terribly wrong. My wife was sound asleep on the bed. I called out and alerted her of the possible presence of a flying animal. I told her to stay completely under the covers and I turned on the light. 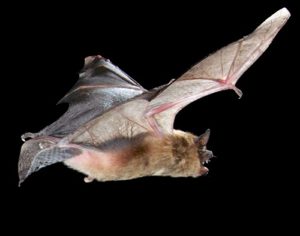 A bat was indeed circling the room near the ceiling.

Now what? I ducked down to avoid the swoops and tried to hold off panic. I wasn’t dressed properly to defend against a bat intrusion. I also had no weapon or means to defend myself. For a period of time my only plan was to shout, “What are we going to do?” over and over. It was not a good plan.

Round 1 clearly went to the bat.

I backed out of the room and put on a long-sleeved shirt, jeans, tennis shoes for traction, a ball cap, a Harley Davidson bandit scarf, and a pair of ski gloves. I returned to the bedroom with a small trash can and a straw broom. I still didn’t have much of a plan. I pulled the bedroom door closed behind me and I closed the door to the bathroom. The initial intent was to contain the bat to just one part of the house. I watched the bat circle the room and fended it away from me with the broom. I realized the struggle was futile and I began to fear that the night would end with a trip to the emergency room for rabies shots.

While the bat circled, I discussed the viable options with my wife who was suffocating under the bed comforter. We decided we could open a window and run away hoping the bat would just leave on his own. The problem with that plan was two-fold. How do I get across the room to open a window?  And how will we know if he ever left?  During the deliberations of pros and cons, I decided to provide the bat an option for a change of scenery and I opened the bathroom door. After a few swoops, the bat took the bait and flew into the bathroom. I closed the door behind him and we had some time to regroup. My wife also had the opportunity to dress appropriately for bat warfare.

Round 2 went to the bat.

My wife donned a long-sleeved shirt, pants, a hat, a scarf, and gloves. We opened one of the windows. In the interim, I also investigated where the cat was and how in the world a bat might have found its way into the house. I found the cat hiding in the basement. Coward. She was the only animal in the house that had an active rabies vaccine. She could have helped. I was somewhat pleased to find the chimney flue open downstairs. At least we had a plausible entry point and would not have to stress about additional bats joining the fray.

After a few intense moments of waiting, I rattled the broomstick inside the bathroom. Eventually the bat revealed itself. It circled in the bathroom a few times before joining us in the bedroom battlefield. I closed the bathroom door.

The bat swooped in circles once again. I swung the broom. My wife waved the screen. The bat came very close to the window on several occasions, but clearly had no intention of retreat. Every three or four passes, the bat diverted to a corner of the room near the ceiling and attempted to land. He slid downward each time and pushed away in erratic flight patterns. This became known as the crazy bat maneuver. At times, the bat swooped to floor level and arced and looped around us. This was a horrifying advancement in bat warfare. In defeat, I opened the bathroom door and allowed the bat to exit the battlefield.

Round 3 three was a decisive victory for the bat.

Armed with our screens and trashcans and brooms, we opened the door to the bathroom and watched him circle the room again for nearly 20 minutes. It was exhausting. He pulled the crazy bat maneuver several times. I resorted to cursing at the bat and cursing our own bad luck. I opened the bathroom door again and the bat entered on queue. If I could train a bat to enter our bathroom, why couldn’t I train the damned thing to fly through an open window to freedom?

Round 4 went to the bat, and we were completely demoralized.

We were also exhausted. I had sweated through my shirt and my glasses were fogged from the heat venting out of the bandit scarf. We decided to push forward. Our spirits were low and we just wanted to be put out of our misery. I opened the door to the bathroom and nothing happened.

But then I spotted him. A small dollop of brown on the window frame above the bathtub. He was hanging the way you would expect a bat to hang. It was creepy to witness this in my bathroom. I decided this was the moment. The war would end here. Either we win or we lose. I told my wife to get back into position near the windows in the bedroom. I could reach the bat with the broom. I figured I could get one good whack. It was all or nothing.

I swung the broom downward toward the target and knocked him from the window. The bat disappeared for a split second into tub. I felt a pulse of elation seeing him drop, but it didn’t last long. The bat rebounded directly toward me. The crazy bat maneuver in the smaller room paralyzed me with fear. He darted and swooped and bounced and flittered. He was everywhere, all at once. I think I screamed.

The bat looped over my head and circled around me. And then he rebounded toward the door. I swung the broom on reflex, like a backhand shot with a hockey stick. I was suddenly in the zone. I felt resistance at the end of the broom as I followed through my swing. I saw the bat changed direction dramatically into a straight line out of the bathroom. Sidney Crosby would have been proud.

I heard my wife shout, “You got him!” And then he was gone. But where? Somewhere in the bedroom. The seconds passed like hours as we scanned the room for evidence of the fallen bat. And then my wife pointed to a plastic file box near the bed. The box was partially filled with manila folders, and at the very edge was a bat with its wings fully extended.

Was it dead? Was it paralyzed? Or was it just conserving energy to retaliate? Without hesitation, I grabbed the garbage can and pinned him down. We quickly decided a transport was feasible and warranted. I picked up the file box and fled down the stairs to the front door. I placed it several feet away from the house and pulled off the garbage can.

Nothing happened. The bat remained there, motionless. But just as we began to celebrate and mourn its demise, he moved. There was a moment of elation since we never intended to kill the poor creature, but still, we didn’t know what to do since he was still a threat. He was also holding my wife’s business files captive. We discussed going back inside and just leaving him there, but the night was damp and rain was in the forecast. The files would be destroyed. I remembered that we once had an extended reach tool, a two-foot pole with a claw on the end and trigger on the other end. My wife ran inside to retrieve it. The bat moved a little while she was gone, but didn’t appear ready to fly or fight.

I hoped my neighbors weren’t awake and watching. I was wearing a bandit scarf at 3 A.M. looking at a box in my front yard. They would surely think me a thief and call the police. My wife returned. With a rake. She explained the claw-tool was last seen in the shed. I will never understand why the plastic reach tool was in the shed and a rake was in the kitchen. It didn’t matter though, the rake failed. My wife went back inside and this time returned with a yard stick. I extended the stick and tried to slide it under the small brown mass. And then, he took to the air. He executed one last crazy bat maneuver and disappeared into the darkness.

To review, this is what we learned: Own a butterfly net. Keep the flue closed at all times. And never rely on a cat to help you out in a pinch.

As it turns out, that trip to emergency room was inevitable. The next morning my wife discovered that the CDC recommends rabies post-exposure prophylaxis for anyone sleeping in a room where a bat is discovered. You should assume you have been bitten because the bite would be painless and would leave no identifiable mark. At least they don’t give the shots in the stomach anymore.